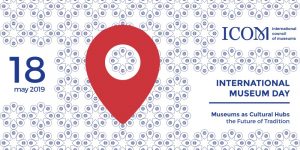 As part of the International Museum Day celebrations (May 18), whose theme this year focuses on Museums as Cultural Centers: the future of tradition, the Quinta das Cruzes Museum intends to reflect on the history and vocation of this Quinta as the the XVIII and XIX centuries, through the different spaces and objects of Decorative Arts that compose the collection of this museum, in order to allow a reflection on the importance of the social habits of the time and its impact on the artistic production of utilitarian objects that still today in day are present in our daily lives.

This year, at the same date, marks the 15th edition of the European Museum Night, an initiative of the French Ministry of Culture, celebrated since

2004. As in previous years, the Quinta das Cruzes Museum has already pre-registered on the official website of the event and makes available on the official agenda all its programming, together with the other European museums that join this celebration (https://nuitdesmusees.culture.gouv.fr/Programme#/pinpoints/24791719)

On this day the museum will be open to the general public, from 10:00 a.m. to 5:30 p.m. with the offer of a pedagogical activity in the morning and two general visits to the museum. After a brief closing, the museum reopens from 7:00 p.m. to 12:00 p.m., with a program that includes, in addition to two general guided tours, a visit-game aimed at the younger ones and a musical moment and two concerts.

Please be advised that entrance to the museum and participation in the activities are free.

Below, we present detailed information regarding the concerts that will take place on May 18 at the Quinta das Cruzes Museum:

It is also possible to find the general program of the Quinta das Cruzes Museum and other national museums that participate in the celebrations of May 18, International Museum Day, in the official agenda of the Directorate General of Cultural Heritage (DGPC).

Alongside the Quinta das Cruzes Museum, the Solar do Aposento da Ponta Delgada, inaugurated in June 2018, celebrates for the first time the Day and Night of the Museums with a schedule that includes two general guided tours to the collections in the morning and afternoon of Saturday and a solo concert by Jéssica Sá (Harpa), one of the youngest harp performers in the country, with a repertoire that includes Music from the Classical Period to the Contemporary Period.

A unique concert, a singular instrument, in the insular music scene of our time, starting at 3.30 pm and aimed at the general public.

The interested public can obtain more information about the programming of Solar do Aposento, through the contact +351 291 644 563.